The history of performance art draws its origins from antiquity if not prehistory. Across the millennia, both royalty and commoners have graced the stage and the stands of grand theaters. A number of venues across the world stand in awesome tribute to the will of humanity to create, to perform, and, often, to persevere. 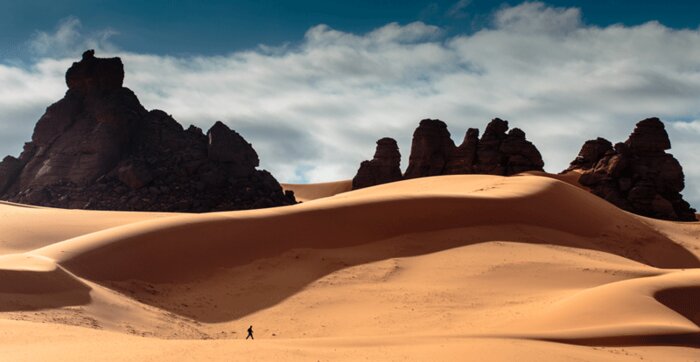 Test your knowledge!
In which African country can you find the Acacus Mountains?

The Odeon of Herodes is a cultural treasure of Athens, Greece. The construction of the theater was commissioned by Herodes Atticus in honor of his late wife in 161 AD. The original construction included a wooden roof of Lebanese cedar to shelter patrons during performances in the rain. For over a hundred years, the theater stood intact until the East Germanic Heruli sacked it along with the rest of Athens in 267 AD.

The ruins were uncovered during excavations in the mid-19th century and restored with Pentelic marble in the 1950s. Today it stands in memory of the great history of Athens and the love of its creator, having served as host for performances by acts ranging from symphony orchestras to Frank Sinatra.

Art and high culture have a long history in Venice. During the 18th century, it had seven active theaters. The Teatro San Benedetto was the jewel of the city, the grandest in Venice. However, a judicial ruling forced the forfeiture of the building to a wealthy Venetian family. In the face of their loss, the Noble Association of Box-holders, who had previously owned San Benedetto, set out to build a new theater, even more spectacular than the last.

In the spirit of their resilience, they named it La Fenice (the Phoenix) to mark their rising from the ashes of hardship. The theater immediately gained acclaim, but in a stroke of tragic poetic justice, the theater burned once again to the ground in 1836. True to its name, La Fenice was reconstructed. The theater continued as a cultural treasure, though it endured a closure during the First World War and a second fire that razed the building in 1996. It was rebuilt once again to be formally reopened in 2003.

In the late 1940s, the director of the Sydney Conservatorium of Music lobbied for a venue to accommodate large-scale theatrical productions. The continued efforts of Eugene Goosens paid off with an international design competition that would select its winning submission by Danish architect Jørn Utzon. The result was Australia’s iconic Sydney Opera House.

The building, best known for its distinctive roof arches above the waters of Port Jackson, features three separate theaters, home to ballet performances, symphony orchestras, and choir performances. The theater accommodates over 1,500 annual performances with an attendance exceeding 1.2 million.

The Bolshoi Ballet and Bolshoi Opera traces its origins back to 1776. They began to make names for themselves throughout the latter part of the 18th century until a dedicated theater was built in 1824. The theater faced several threats to its continued existence and multiple renovations, but both the theater and company survived. The Bolshoi has housed the likes of Tchaikovsky’s “The Voyeda,” Rachmaninoff’s “Aleko,” and of course, the world renowned performances of the Bolshoi company themselves.

Originally the “Theatre Royal,” The Royal Opera House in London began its history as a playhouse. The funds for its construction were obtained by John Ritch of the Duke’s Company following his success at The Beggar’s Opera. In 1732, the Theatre Royal housed its first performance: William Congreve’s “The Way of the World.” Over the years, the theater housed ballets and operas, until, like many of the entries on this list, it was lost to fires. The current building traces its reconstruction to the 1990s with a main auditorium seating 2,256 with four tiers and balconies.